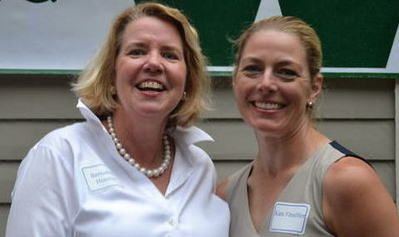 The weather forecast for Saturday, September 8 was dire, and the black clouds rolled in on schedule, but the members of the WUF Pillars Club were not deterred. Close to 100 supporters and agency executives braved the tornado threat to attend the Westfield United Fund’s Annual Pillar Party at the home of Anne and Keith Wargo.

The party is the kick-off event for the annual fundraising campaign, which begins this month. Campaign Chair, Bernadette Houston (pictured here with her Co-Chair, Kate Fleschler), thanked the donors for supporting the wonderful work that the WUF member agencies do to help people in Westfield and the surrounding communities. The residential campaign was launched this week with the mailing of pledge cards to every household in town. Over two thirds of the campaign is raised through donations by the Pillars Club, the fund’s major donors.